A little late to the party at this point, but Russell Wilson is now a New York Yankee. Yeah that’s right, the Seahawks quarterback, not just some bum ball player that happens to have the same name. Im sure most people already know this, if not then surprise, but I thought it would be a good idea for me to try and decipher why exactly this happened.

Wilson is about to enter his 7th year in the NFL and also his 8th year as a professional baseball player. Just a quick background on Wilson’s baseball career: Before he was drafted into the NFL or really even made a name for himself as a quarterback at Wisconsin, He was drafted by the Rockies where he played class A ball. After his rookie year in the NFL he was then traded to the Texas Rangers where he just screwed around and was invited to Spring Training but obviously as we all know he continued to pursue his football career. Now during this extremely slow MLB offseason, the Yankees traded for Wilson to play in this years Spring training. Don’t worry the Yanks didnt trade away anybody important, just some “future considerations”, whatever that means. 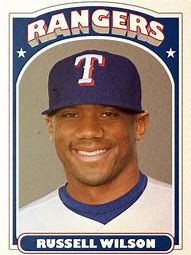 Personally I have mixed feelings about the situation, Im excited to see Wilson in pinstripes. It’s been a lifelong dream of Wilson’s to play not only for the Bronx Bombers, but in the MLB. I can only imagine that Wilson wishes his baseball career had taken off so he wouldn’t be remembered as the guy who threw a INT to a cornerback who got benched in the Superbowl. Regardless I’m happy for the guy, what I don’t understand is why the Yankees went after him. Sure, I’d love to believe that Cashman heard that Wilson was a lifelong fan and decided to make his dreams come true out of the goodness of his heart, but this is surely just a publicity stunt.  Why one of the most well known American sports organizations would want more publicity beats me, but it sure turned the heads of all sports fans. I’m sure the Yankees front office thought people would think to themselves, “Wow, those Yankees now have Stanton, Judge, and Wilson! I wonder if Wilson could be the next Deion Sanders?” Fat chance people. He’ll enjoy his offseason kicking dirt and spitting seeds in Florida and be right back in Seattle for the first rainy day of training camp.

As a true Yankees fan I can’t deny I’m intrigued by the trade and Wilson might be the only reason I watch Spring training this year. Baseballs right around the corner people and Wilson might have something to do with a 28th trophy headed to the Bronx.