After seeing Woody make the executive order to revitalize TPA entertainment, I thought I’d procrastinate a little from my finals studies and hop back on the keyboard. It’s always tough finding something to blog about. Like a true artist, one must be inspired. Since you last heard from us, there has certainly been much to talk about. But being a fulltime student, it really is hard to get inspired to sit down and bang out a blog. What inspired me to finally do it was a familiar argument I was faced with in a classroom today: Jerry Rice v Randy Moss.

This may be a topic I have talked about to death, but I truly am passionate about the topic. We have talked about it on our podcast before, and I have even written a blog on the receivers that are better than Jerry Rice. But looking back some of my takes in that blog…. Yikes. Andre Johnson over Rice? while I still believe it’s closer than most think, I truly don’t know what I was thinking. After a lot of thought on it I just have to sit back and realize there have been a lot of extremely talented receivers to play in the NFL and the beauty of sports is everyone can have a different list. While I still believe guys like T.O., A.B., Megatron, and Larry Fitz are still above Rice in my book, I have learned to accept and appreciate the different takes and arguments against my claims. But there is one I simply cannot stand for. And that is that Jerry Rice is better than Randy Moss.

Am I biased? Maybe. Moss is one of my favorite athletes of all time. As many of you know, I was in attendance at his Hall of Fame induction ceremony this August where I wore the Patriot 81 jersey (Not with Hernandez on the back) in pride all weekend. To prove it, here’s a picture of me with my good pal Rich Eisen that very weekend. 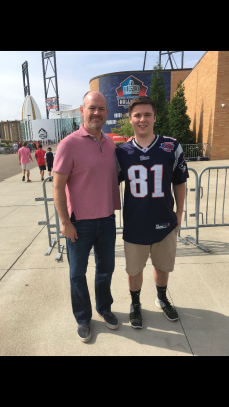 Yeah, humble brag. Anyway, I do recognize my bias. But I mean damn, it’s Randy Moss. He has maybe the best highlight reel of any football player not named Barry Sanders. That would be enough of an argument for me, but I will break it down for those who don’t always agree with me.

First, how can a receiver benefit their team the most? By scoring a shit ton of touchdowns. To Rice’s credit, he does have the most touchdowns in NFL history. An impressive piece to have on your resume. But take a look at a chart found on reddit: 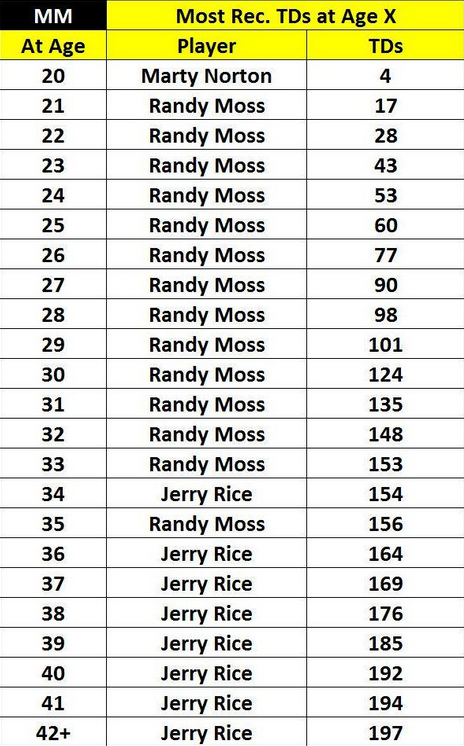 Randy Moss clearly dominated in his prime which lasted a very long time. This is also quite impressive for Rice as well. He had a great work ethic and was incredibly durable to be able to put up these numbers. Congrats, so is Eli Manning. Durability is certainly key to being great. But I don’t feel it’s everything.

Second, and I feel this is most important. Jerry Rice came out and fully admitted to using stickum throughout his career. That right there is called cheating. If you can’t call Brady the GOAT because of deflate-gate because it gave him a competitive advantage, than Rice can’t be the GOAT because he also had a competitive advantage. Whether everyone used it or not, Moss never used it and I think almost every Moss catch is far more impressive than any Rice catch where Montana/Young hit him in the numbers. But let’s talk about their quarterbacks for a second.

Rice did play with two hall of fame quarterbacks and only amassed 1,000 yards twice after each retired (Both times were with the red-hot Rich Gannon).  In no way am I saying any of these men made his career, and I’m sure both Montana and Rice would give him credit for their careers as well. But the fact is Montana had already won without Rice, but Jerry did make that offense better. My point is that he wasn’t a necessity to win in that system. Again, not taking anything away from his remarkable statistics and his Super Bowl MVP. He did play his ass off and worked harder than anyone else on the gridiron. But Bill Walsh, maybe the greatest offensive mind ever, had a Super Bowl winning system before Rice ever left Mississippi Valley State. Moss on the other hand did not have many spectacular quarterbacks. An aged Randall Cunningham who I believe Moss made that ’98 Vikings offense click. Dante Culpepper, who gave hope to fat guys everywhere that if they only did right arm workouts every day and had Randy Moss, they too could play football in the NFL. Moss also played with Brady who is arguably the best to ever do it. But I’d argue Brady was made better by Moss. The year Moss arrived, Brady had the best season of his career and for the first time ever didn’t throw double digit INTs.

Lastly, this wouldn’t be complete without talking about the era each man played in. Sure, Rice played at a time where cornerbacks could essentially mug receivers, Moss did too for most of his career. I would also argue it was easier for Rice to make plays. When the defense is completely stacking the box which was what happened in the ’80s and ’90s, it’s quite easy to burn the one defensive back on you. Moss was burning THREE defensive backs in a similar era where defensive backs could have your way with you.

I hope you stuck around through my entire rant, and I do hope this is enough to put the argument to rest. I do have a ton of admiration and respect for both guys despite being accused otherwise. I guess playing for 20 years in an offense FAR ahead of your time and using a substance that quite literally makes a football impossible to drop makes you better than Randy Moss.

If you’re still not convinced: do you really want someone who tattoos this on themselves to be your GOAT? 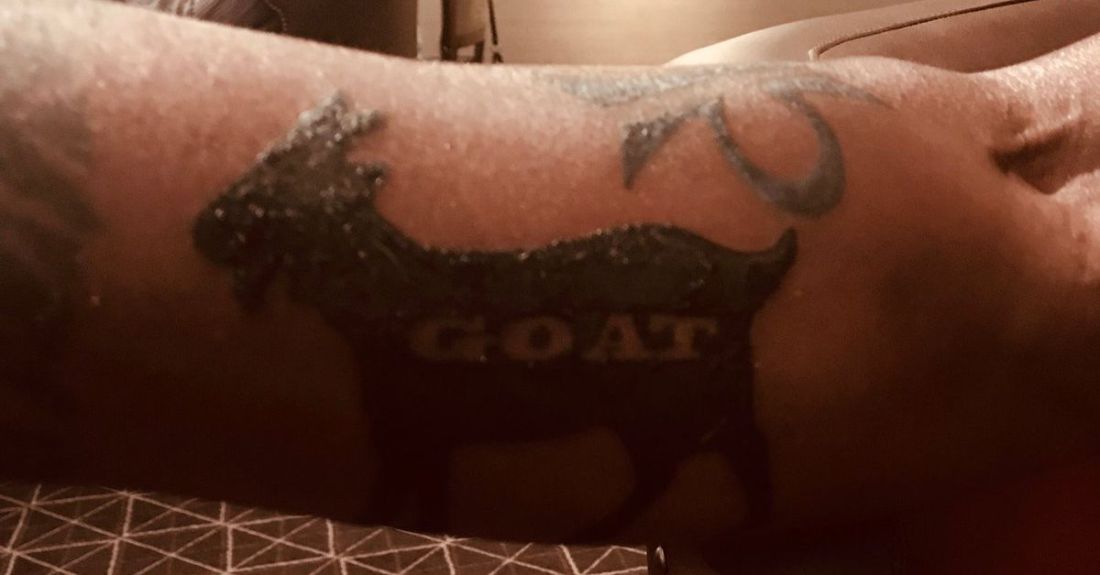 Images from: Ninernation,com, espn.com, and reddit.com